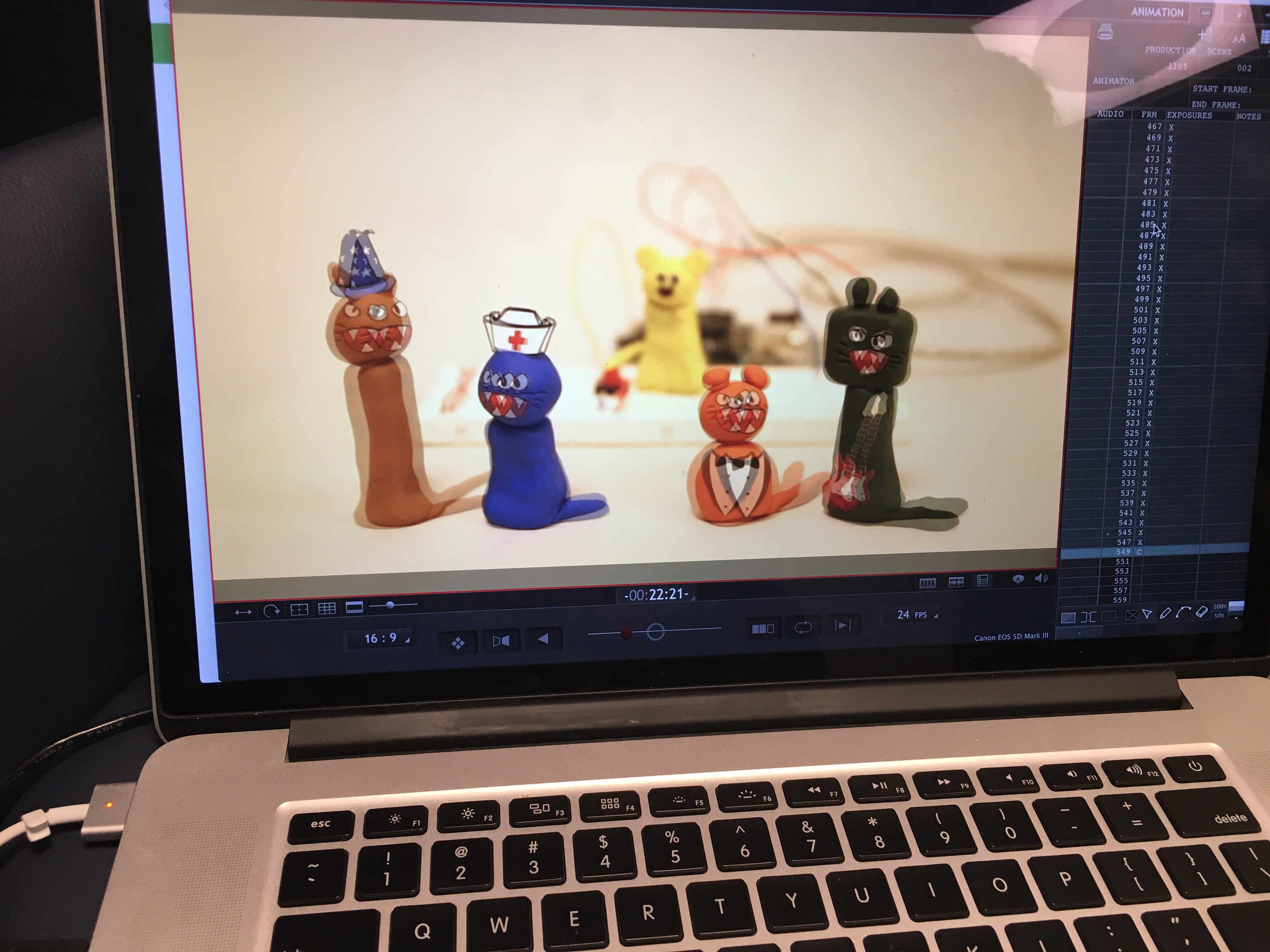 For my first assignment in Animation, I created a 30-second video with Lanni. Throughout the process, I learned a great deal about storytelling and stop motion animation.

Our idea is based on one of my previous projects. For my third week in computational media, I created an interactive sketch in which different cats appear each time a button is pressed. For physical computing, I connected the sketch to a red pushbutton. For animation, we produced a story that centers around the button.

We first started by imaging the story. We desired to create a lonely cat who researches how to make friends. When the cat searches on a computer, the result leads to an Arduino forum. Afterwards, the cat connects an Arduino to the computer and clicks the button. Each time the button is clicked, a new cat appears. While they are happy initially, they begin to fight and destroy each other. I believe the moral of the story is that we cannot control how well individuals get along with each other. The main character greedily did not stop making friends with the button, which may be viewed as his/her downfall.

We shot in one of the private rooms in ITP. We hung a black curtain on the transparent wall in order to establish a consistent level of lighting. We used a white piece of paper on a table as our minimalist setting. We charged both the camera and laptop while we filmed. The most challenging part of the assignment is the initial setup, such as the spatial design of the project and creating an a beginning that may be easily looped. I am very satisfied with the saturation and brightness in the video.

I enjoyed deploying the Dragonframe onion effect throughout our video. Once Lanni and I developed a pattern, the shoot became very smooth. We constantly rewatched our footage in order to identify the greatest lengths for each scene. We played at 12.5 frames per second. Overall we had about 700 frames. On various occasions, we copied and paste inserted frames to extend the lengths of certain actions. The slow ins and slow outs conveyed a more fluid level of animation. The facial expressions are purposefully exaggerated. We paid careful attention to follow through and overlap. Right before the cats attacked each other, Lanni and I implemented a high level of anticipation.

We edited our video Adobe Premiere Pro, which is very intuitive to use. We added two soundtracks, button noises, and a title. We removed a few frame that broke the continuity of the video. We focused on every detail of the animation, especially the movement of the tails. I enjoyed the animation process, such as how Lanni and I created a story with a clear beginning, middle, and end. I hope our video is silly, but may also leave an impression on the viewer.

Additionally, I read “Understanding Comics: The Invisible Art” by Scott McCloud. I have not read comics greatly, but I enjoyed the book tremendously. I never thought about how comic book characters are purposefully ambiguous looking because readers place themselves in the character. When a comic book character is too realistic, the reader does not connect as well. Humans naturally assign their identities and emotions to everyday objects. I’ve never analyzed comics as an art form, but the book opened my eyes to the complexities of the storytelling medium. Comics are juxtaposed images in a deliberate sequence. When they are read in order, the reader is connecting each panel to develop actions in a powerful manner. The comics within the book illustrated the main points very well.

I admired how the author analyzed the powerful ability of human creativity. We combine separate images to form a single idea. Comics consistently push the reader to utilize their imagination to the fullest. When the author introduced colors in panels near the end of the book, I felt powerfully affected by them. I noticed that the introduction of color constructed new layers of meaning in each panel. The most interesting part of the book is the apparent backlash of comics as an art medium. While literature and photography are both praised, mixing words with images is unnecessarily considered a lower form of art. In my future projects, I hope to experiment more with loose structures. I would like to provide my viewer with small parts that slowly culminate into a greater picture.