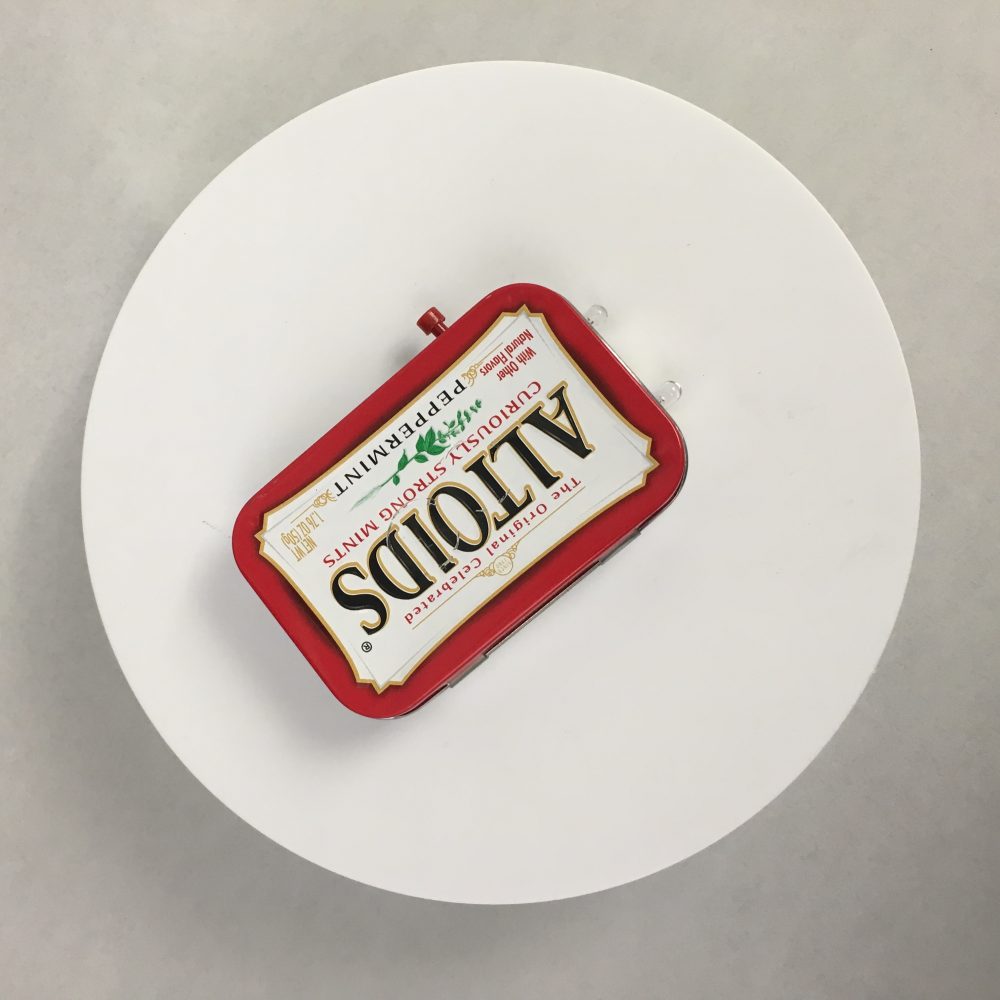 For my first week in Introduction to Fabrication, I created a flashlight out of an Altoids case. Throughout the process, I learned a great deal about the shop and the fabrication process.

I chose an Altoids case because the wires are hidden well. I’m happy with the end result, but I created a few obstacles that could have been avoided with more planning.

I first began by gathering all of my parts. I bought a triple battery holder and a switch from the Micro Center in Industry City. I would have used a double battery holder, but the store did not carry this.

I used two white LED lights. I stripped the ends of both my wires of the battery holder. I bent the cathodes of both lights. The anodes are connected to 100 Ohm resistors that I simply twisted initially.

I soldered the LED lights to the resistors. I originally desired four LED lights in order to create a very bright flashlight.

Throughout the fabrication process, I continuously tested to make sure my lights work when the anode and cathode are connected to the positive and negative wires of my battery holder.

I created my first fabrication mistake! I soldered too many LED lights together. The product appeared clunky and not easy to manage. If I wanted to use four LED lights, I should have soldered the anodes individually to wires rather than all together at once.

I snipped two LED lights off. Changing plans midway through the fabrication process adds more difficulty to a project.

For my next part, I attached a piece of thin wood to an enclosure and began testing with different drill bit sizes.

I used the nicer drill bits.

I would test the sizes made from my drill bits. I could have measured the size of the LED light and use a drill bit that corresponded, but they were not organized by size correctly in the box.

I measured my Altoids case, which was about two inches. Then, I marked the box at 0.5 inches and 1.5 inches.

The hole on the right looked better than the one on my left. I drilled the right hole slower from the outside to the inside of the box. I found that drilling in metal is very difficult. I wonder what is a better alternative. I used a larger drill bit for the hole for my switch on the side of my Altoids case.

I attached the switch to the negative wire of my battery case. I’m ready to go!

At one point, the cathodes of my LED lights snapped off when I attempted to insert the circuit in my Altoids case. I added more LED lights to this complicated glob, but I decided to snip this off completely and start again. I don’t have that much experience with soldering, but I believe that my items would snap because I did not apply enough solder.

Feeling tired from soldering, I opted to use copper tape. Since my Altoids case is conductive, I accidentally created a switch. I should have insulated my case beforehand. In the video, you can see the hole I created for my button. I used hot glue to hold the button and LED lights in place. Tape would come off easily.