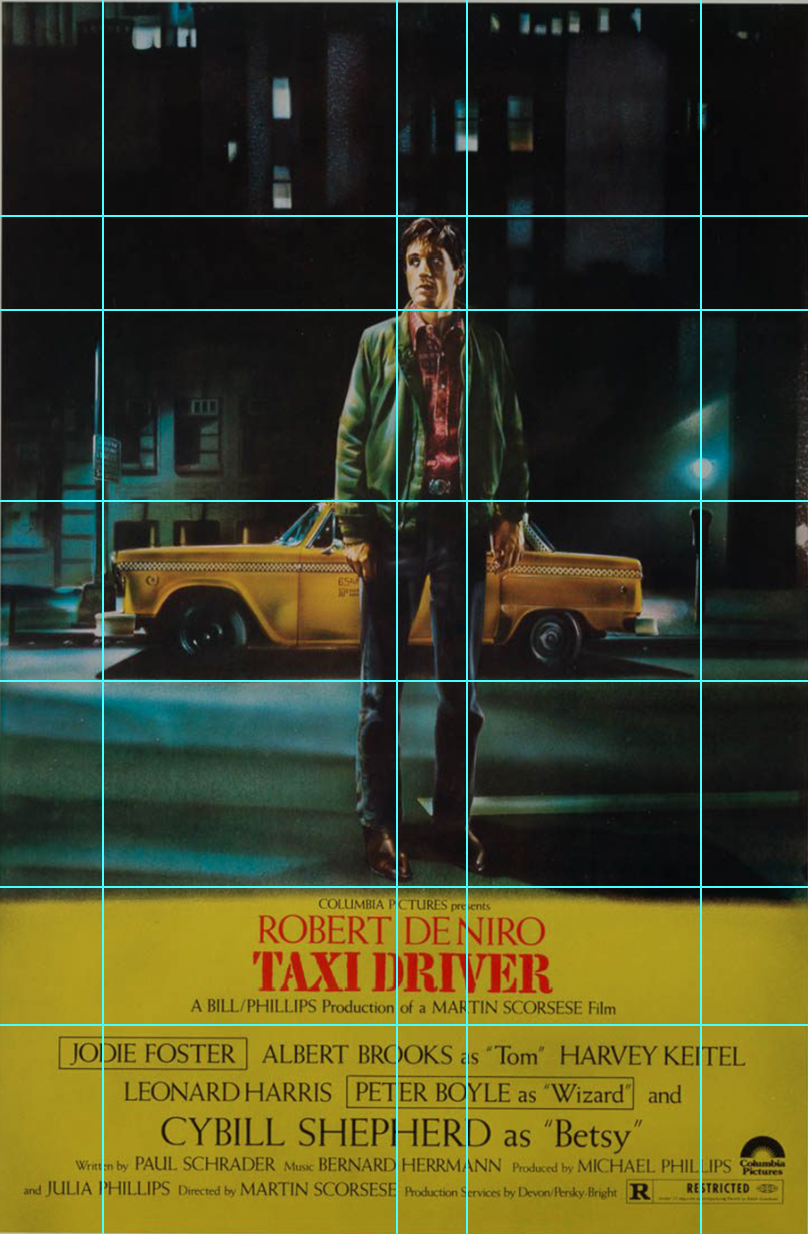 The grid system for the “Taxi Driver” poster is highly organized. Vertically there are four lines and horizontally there are six. The sign on the left and the parking meter on the right are equidistant from the borders of the poster. The main character’s head is in the middle of the picture horizontally, which draws a high level of attention from the viewer. Vertically the head is placed in the upper third of the poster, which further enhances the significance of his gaze. Except for Travis Bickle’s head, most of the lines horizontally are equal in terms of length. For example, the horizontal length of the taxicab matches the length of the title of the movie in red font. According to the grid system, the taxicab is slightly off-center. The vertical lines vary between shorter and longer lengths in a unique pattern.

The poster has a clear hierarchy. Bickle is standing in the front with the taxicab behind him and the ominous city in the background. The viewer of the poster immediately analyzes Bickle who is gazing at an unknown source of light on the left, which may represent hope in the desolate setting. The taxicab that is intersecting Bickle’s body suggests that he cannot be separated from his vehicle. The vehicle is parked in an ominous street that extends into the unknown. While Bickle appears tranquil in the front, he is only temporarily detached from his surroundings.

I identified a few different fonts. For the title of the film, the font is “P22 Pop Art Stencil.” The distinct font differs from the rest of the advertisement, which is an effective marketing tool to grab the viewer’s attention. The font may be described as old-fashioned. The thick bold letters convey the tone of the film, which is gritty and harsh.

The list of the names of the actors is “Weiss Roman,” which is a very minimalist font. This font contrasts greatly from “P22 Pop Art Stencil.” The names Jodie Foster and Peter Boyle have squares surrounding their names, which exemplifies the identities of the actors. Cybill Shepherd is the largest name, showcasing the importance of her casting. The writer, producer, music artist, and director are in a smaller font.

While most of the names are in “Weiss Roman,” the word “Wizard” is in the font “Medieval.” The playful font is a reference to Medieval European magic that is out of place in the context of the film.

The main colors are black, yellow, green, red, and blue. The black color varies in intensity throughout the movie poster, constructing a mysterious setting. The artificial light creates spots of blue. In this poster, the blue may be represented as sad. Although yellow is often a happy color, the taxicab represents havoc in the film. The yellow taxicab pops in appearance behind the main character. Likewise Bickle is wearing a green coat, which is an earthy color that does not fit within the artificial atmosphere of the poster. The green coat is worn with a red shirt, which are complimentary colors. These complimentary colors contrast greatly, which creates a vibrant appearance for the main character. In the bottom half of the poster, the red title and the yellow background are slightly brighter than the corresponding colors in the picture above. In doing so, the poster emphasizes the information for the consumer. As a result of the stylized design, the colors and shadows in the poster blend together well.